Ten things every local publisher should know about trust

What happens when a large percentage of your local audience no longer believes you? And why don't they?

Fortunately, this is well-studied area. Poynter, Knight-Ridder, Edelman, Reuters, and their partners ranging from Gallup to Axios and Oxford University, all release studies at least once a year.

Here are the top findings we gleaned from these reports, and some actionable takeaways in 2021

1. Most people no longer trust the national news media

Trust in media overall is below 50%, but national news itself is in a 30% ditch. Not only cable news, with its 80/20 hours of opinion to news ratio, is distrusted. Republicans also distrust the key national newspapers, New York Times and Washington Post.

Takeaways:  Citizens don't compute the difference between good journalism and bad journalism, between television reporters and pundits.  This spills over to the local level, so put media literacy on the agenda.

2. Local media is still the exception

While trust in local media has also dropped, it is the only category that still has a trust level above 50%.

45% of Americans still trusted local news “a great deal” and another 40% trust it somewhat (Knight-Ridder, Gallup, 2018),  forming an admirable total of 85%.

“Local news media are better than national news at covering issues Americans can use in their daily life (79%) – and in reporting without bias (66%),” another study said.

Take away:  Give yourself a pat on the back, and 30 seconds to wallow in glory.  Now consider that if any media sector is poised to lead the charge of media literacy it is going to be you.

3. The trust issue is partisan at the local level, too. Only 27% of Republicans trust local media.

The data is clear and there is not much point to tip-toeing around it. While business owners have griped about liberal reporters for decades, what we are seeing now is something very different.

Nine out of ten Republicans report dropping trust in media (Knight Ridder Foundation ), a 45 point trust gap between the right and Americans overall.

A partisan view of media is seeping into the local level as well. While 50 percent of Democrats express confidence in local media, only 27 percent of Republicans do – a 23 point gap.

Takeaways: Local media may be on a trust sugar high,  but my be further behind than they think.

3. Trust is dropping over time

This is not a static environment. Trust is not so gradually eroding. The percentage of people who trust media overall dipped from just more than half to 46% just in the past year.

A good way to actually see the vagaries of trust is in a visual created by Axios (Edelman, January 2021) for the article “Trust in Media Hits a New Low”. 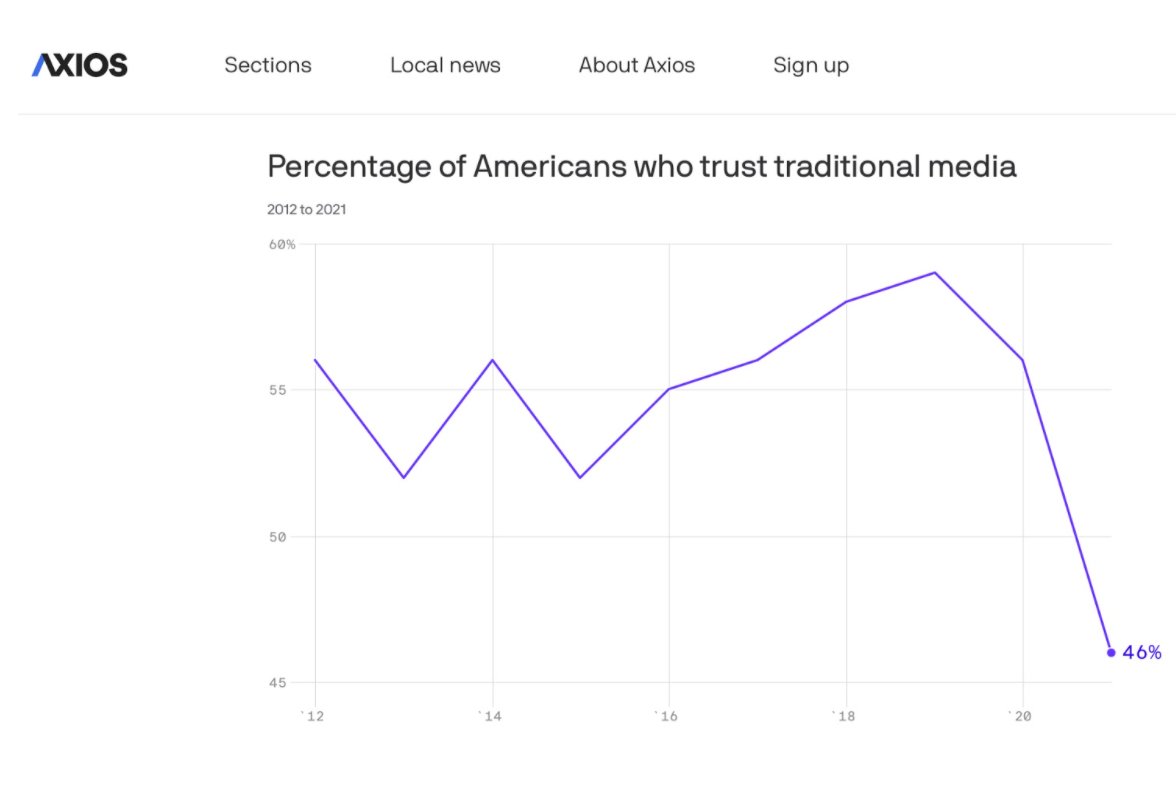 That downward stick between 2020 and 2021 represents the first time trust dropped to less than half the population and a decline of about 15% in one year.

You can also see that there are some upward spikes in this graph, just not recently.

Takeaway:  Time is of the essence as bias against media at the national level seeps into local politics and community perception.

5. Why people say they distrust media:  Inaccuracy and bias

Studies show perceptions of inaccuracy (45%) and bias (16%) are the two top reasons for distrust of media.

Since people are more likely to trust the information they think is accurate and unbiased, this is an advantage for local media, which limits and labels opinion pieces and has a higher ratio of objectively reported news.  This is especially true for local newspapers, who can add more context and dive more deeply into stories.

Takeaways:  Accuracy is by far the most important trust factor.  With limited resources, protect the allocations to reporting and uphold sourcing standards.

Bias is the second reason people lose trust in media. Adding super visual labeling of news and opinion (color-coded labels are great for this. It's free and you only need to do it once. See Thetrustproject.org for a list of best practices.

Along these same lines, 60% of people surveyed do want the news to be objective.

When people say they don’t trust the media, they often mean television and, specifically,  cable news, in which hours of opinionating dominate the day without any clear demarcation between punditry and news.

7. People don’t trust social media, but get news from it anyway

Only 16% of people in one survey said they trust social media, yet it is used by an average of 31% as a primary source for news.

Takeaways: Watermarking is on the way.  In the meantime, fact-checking services can incorporate suggestions from the public who are getting information from social media.

8. Being part of the local community builds trust

Studies found another interesting phenomenon that works in favor of local news media: Any local interaction with the local media - even seeing a truck with the newspaper label driving around the city -  builds trust (Gallup).

Takeaways: You have a great head start.  One COO of a newspaper chain with small markets asked publishers to count the "pics & names"   of local people in the paper every day. He had an intuitive understanding of the importance of multiple touchpoints.  Another newspaper publisher compared pics of  high school grads posted online during Covid to "cat videos" in terms of performance. Others have turned parts of the buidling into cafe's or journalism labs open to locals.  All  are on the right track.

9. Citizens want their local newspaper to be a watchdog

Studies show Americans want local news to hold “powerful people and institutions accountable” (KnightRidder, 2020), although 60% feel local news only does a “fair” or “poor” job of this accountability reporting.

Takeaways:  Embrace, rather than shy away from controversy posed by the watchdog function. When cost-cutting and allocating scarce resources, prioritize investigative coverage of civic institutions and hot-button issues.

Local newspapers and their websites remain the top source of news about a particular town or region, reaching four in ten citizens (44%) weekly (DigitalNew Report, Reuters and Oxford).

This is good to know! However, there is sometimes a mismatch between resources deployed - i.e. what newsrooms want to cover  - and what citizens feel is important.

Participants in the Knight-Ridder survey said they wished for “additional coverage [in areas that] include drug addiction (65%); K-12 education (64%), the environment (64%), and plans for public works projects (64 %)”.

Takeaways:  Keep your ear to the ground, via surveys or other kinds of engagement.  What are people talking about? It is not always what the Mayor said or government actions, but, also issues that affect their daily lives and which are sometimes have not been acted upon, such as neglected environmental damanage, economic justic issues, or, in the case of one city, the high rate of auto/pedestrian accidents.

Balance what beats editors think are important with street-level information about topics the community thinks are important.   Gut-level issues vary from community to community and publishers who “get it right” see big pay-offs.

You are probably starting to see a few themes emerging from this data. The first is the importance of prioritizing resources allocated to reporting local news.

The second is the importance of improving media literacy, as the crisis of trust in news slowly trickles into all of our towns.

Start by  joining TheTrustProject.org.  It is free and has a simple roadmap to increase the kinds of transparency audiences want.

Third,  put media literacy higher up in the list of priorities. This might mean guest speaking about journalism standards at local high schools,  creating a  segment on the website,  adding media literacy to the mission statement,  or any other project that fits into your tight schedule. Readers need to know the rules you are playing by, and what journalism actually is.

Probably by now, everyone in your organization is a committed team player. You may only need to let them know how much every interaction matters.

The future of trust is going to a street fight, and it will happen at the local level. So remember the reason you went into this business in the first place. The future belongs to you.